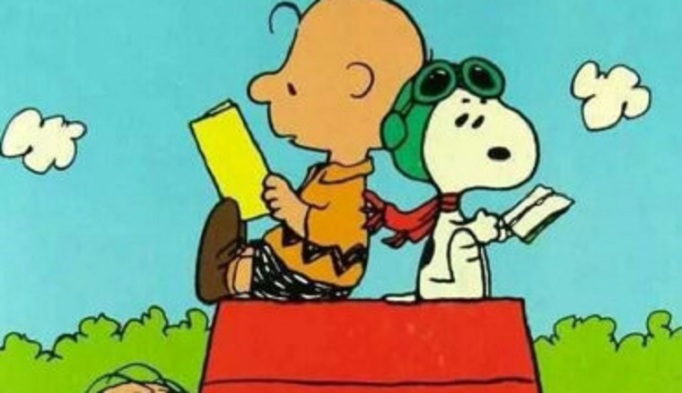 During the past couple of years, I’ve looked to the past to try and make the present happier. Getting back in touch with the things that once brought me joy could bring joy once again. Maybe that’s a form of regression. Maybe it’s a futile attempt to reminisce about simpler, more care-free times.

This has been on my mind for quite a while, but Meghan Daum’s recent essay on Medium got me thinking about it more. At 47, two years after her marriage ended, Daum is living much like she did as a 27-year-old. Is that always who she was, deep down, even when she tried to follow the path — career, marriage, etc. — to which we all aspire?

Maybe Rust Cohle was right. Time is a flat circle.

A couple of years ago, I was intrigued again by pro wrestling. I don’t know if I needed some TV that didn’t require me to follow storylines or an athletic endeavor that I didn’t have to write about soon after. The promise of watching old matches and documentaries of previous eras on WWE Network was enticing. Yet I never quite followed through. And eventually, what interest I had in wrestling was quashed by how much of it was on TV. It was five hours a week, and some of those weeks included another three or four hours of a pay-per-view event.

Nowadays, it’s comic books. After avoiding spending money on comics for a long time, I’ve began reading more regularly again. (One example of that is in the reading links below.) Pop culture has certainly made that easier with superhero movies and TV being so popular and their source material being accepted, rather than mocked.

This blog is another example. I’m trying to write for me again and find what enjoyment I once got from it, rather than just churning out content and chasing topics that will get views. Hopefully, that leads to me writing some fiction again. I recently had a good idea for a story worth jotting down for the first time in years and I was happy about it for two days.

Surely, I’d feel differently or wouldn’t go back to the past if I was a parent. Daum reached the same conclusion. I don’t have kids forcing me to be an adult or to put my own interests and concerns aside. Yet I don’t have a problem with that either. And I’m OK with going back to things I used to love.

Steven Soderbergh’s latest movie, High Flying Bird, is now on Netflix, adding to a filmography that goes at least 30 films deep. (The body of work is even larger when you include short films and TV he’s directed.)

For many critics, students and fans, a new Soderbergh movie often compels the need to look at his entire career and determine where his latest film fits among the dozens of others he’s made. Personally, I know I feel that pull and try to nudge myself into going back to watch every one of Soderbergh’s films. Not to rank them, necessarily, but just note what each movie represents in his evolution as a filmmaker, what new thing he’s trying, what boundary he’s attempting to challenge. 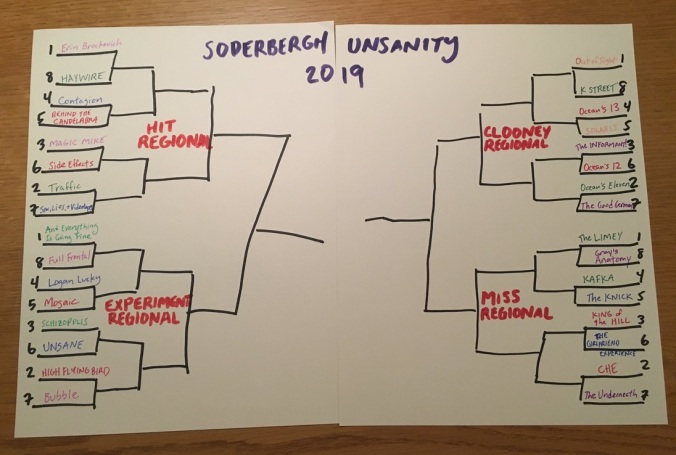 Or you could do something really fun — and timely, with college basketball tournaments approaching — and put all of Soderbergh’s films into a bracket. Slate’s Dan Kois did just that, posting his bracket on Twitter, pitting Soderbergh’s movies against one another to determine which are his best.

Even better, Kois divided the films into regionals based on different stages of Soderbergh’s career. Where was he most experimental or most popular? What about when he and George Clooney were making films under their Section Eight production banner? The bracket was set up nicely by Kois and it was fun for followers to chime in and vote for their winners.

I still intend to go back through Soderbergh’s filmography chronologically during the year. Maybe afterwards, I’ll fill out this bracket.

I subscribe to (too many) food newsletters with recipes and recently noticed what I thought was a familiar dish: Collard Greens and Kimchi. I figured it was Edward Lee’s recipe because that was where I first saw someone add some Korean kick to a Southern food staple.

However, the Garden & Gun recipe was different, more ambitious in calling for the cook to make his or her own kimchi. While that could be fun, it’s also a lot more work than wilting down the greens and adding a jar of your favorite kimchi (which is increasingly easier to find in grocery stores nowadays).

Lee’s Collard Greens and Kimchi have been a regular part of my cooking rotation for the past few years, ever since he made the dish on The Mind of a Chef. This could be a side dish or a full meal, depending on whether or not you add country ham and how much of it you include. A little goes a long way with that stuff. Bacon might be a better choice.

I should probably have a real song/video here, but Melissa Villasenor’s impersonation of Lady Gaga singing “Shallow” from last week’s Saturday Night Live provides this week’s music. Villasenor really belts it out here! Can we have her perform at the Oscars too? (Maybe if it was an NBC production…)

Melissa Villaseñor deserves to EGOT for her celebrity impressions. This Lady Gaga one is *chef's kiss.* pic.twitter.com/G37BkvFY8D

I suppose I haven’t watched enough Gaga performances to know if the shoulder and eyebrow movement is accurate. It might be even funnier if she doesn’t really do that and Villasenor just added those quirks.

** In geek circles, streaming TV provides a double-dose of fun with the premieres of Doom Patrol on DC Universe and The Umbrella Academy on Netflix. That speaks pretty highly of My Chemical Romance’s Gerard Way, who’s written comic book stories for both groups of characters. (He created The Umbrella Academy.) [New York Times]

** Since Donald Trump was elected, many conservatives have spurned the Republican party and have made careers out of being “Never Trumpers.” One of my favorites has been Steve Schmidt, who worked on John McCain’s presidential campaign (and was portrayed by Woody Harrelson in the Game Change movie).

I’d been listening to his podcast with Elise Jordan, Words Matter, because of it — to hear from the other side, so to speak. But Schmidt is now consulting for Howard Schultz and when he was asked about that obvious conflict on the podcast, he got mad enough to storm off the show. [The Daily Beast]

I am so grateful to everyone who listened to the Words Matter @WMM_podcast. Unfortunately, I have decided to step away from the company Steve and I co-founded but hope we return soon on a new platform.

** Slate’s Mike Pesca followed up with Words Matter‘s producer, Adam Levine (no, not the Maroon 5 guy), who asked the questions that compelled Schmidt to end the interview. [Slate]

** If you’ve gotten irritated over being logged out of The New Yorker‘s website constantly, you are not alone. (Recently, this has been a particular annoyance for me, especially when I can’t remember passwords and get locked out after three to five tries.) The site tightening its paywall could be a culprit, but it’s also a bug that the tech guys can’t figure out. [Nieman Lab]

** I doubt anyone gets into journalism for the money, unless he or she has ambitions of becoming an anchor or pundit on TV. But when an established writer like Jeff Pearlman gets paid $250 for a 1,500-word article, that’s depressing. Yet Pearlman is defending The Athletic here. (Hopefully, not just because he wants to continue writing there.) [Jeff Pearlman] 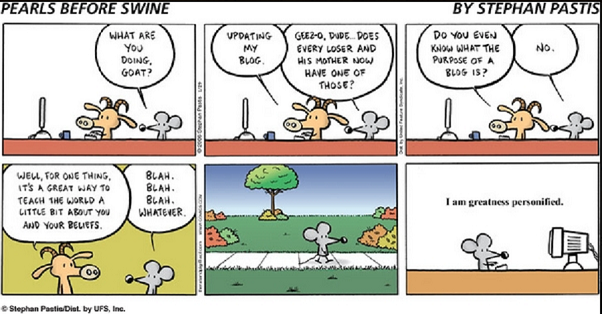 ** Stephen Pastis’s Pearls Before Swine is consistently one of the funniest comic strips being made. (Rat is my spirit animal.) His productivity is even more impressive when you consider how many of his peers (Get Fuzzy‘s Darby Conley, for example) have either stopped creating new strips or have really throttled down on their schedules.

Besides the humor, however, one of the reasons Pearls is so good is because Pastis sometimes gets personal. In December, his strip about his dog, Edee, who was dying of cancer, was published and readers responded in a big way. [Washington Post]

** Many of us grew up on “alternative” music like Nirvana, Pearl Jam and the Red Hot Chili Peppers. (Maybe it goes back even further, if you include punk groups like The Ramones or Dead Kennedys. But wasn’t that music “punk”?) Now, that could almost be considered “classic rock,” which should make your skin shrivel. So what is considered “alternative” music in 2019? Does the term even apply anymore? [City Pages]

** One reason I’m not as interested in this year’s Oscars is that many of the films I thought were really good were overlooked. (I guess that makes me like most people who don’t care about the Oscars. At least this year.) Leave No Trace, for example, and Ben Foster should’ve received much more recognition. [IndieWire] 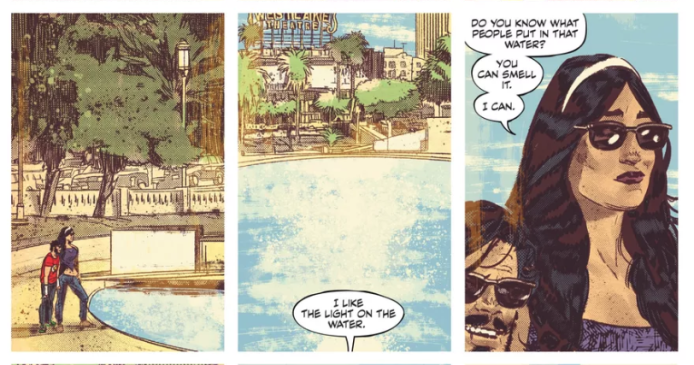 ** From mid-2017 to late 2018, no comic book series intrigued me more than Mister Miracle by Tom King and Mitch Gerads. The 12-issue series is about to be released in a trade paperback collection (that I’m probably going to buy, even though I have the individual issues). I swear, it renewed my interest in comics. Susana Polo takes an outstanding, page-by-page deep dive into issue No. 5 of the series to demonstrate why it’s so good. [Polygon]

** Newer apartment buildings throughout the country really do look the same, don’t they? I especially noticed that over the past year when I saw bigger versions of buildings in cities like Seattle, Providence and Charlotte that I regularly drive by in Asheville. It’s not our imagination. [Bloomberg]

I am a community college dropout who waited tables for 5 years, worked in video stores for 6, and didn't sell my first novel & screenplay until I was 35.

Don't ever let anyone convince you that your age or circumstances will keep you from being a writer. Only you decide that.