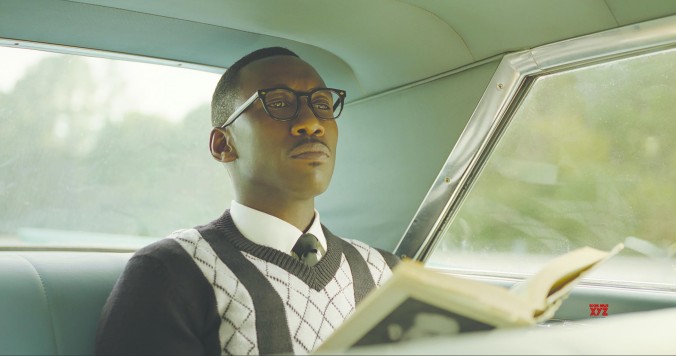 Am I already falling behind on 2019? (Falling into old bad habits is more like it.) I’ve been pretty good with eating less (and better), reading more, and keeping up with TV shows. I’ve been obsessive about doing the New York Times crossword puzzle, though I still can’t get past that Wednesday hurdle. (The mini puzzles on the app, however, are totally addictive brain candy.)

But my resolve to write more can’t slide, man. So Overzealous Recycling is back after a week’s absence. Did you even notice?

Mahershala Ali as this week’s featured image seemed only appropriate. He’s starring in Season 3 of True Detective, which thus far promises to be a return to form for Nic Pizzolatto and his bizarre crime anthology. Ali also earned a Best Supporting Actor nomination for his role in Green Book (a movie I inexplicably still haven’t seen yet) and looks like a strong favorite to be a repeat winner in that category. He’s also in Alita: Battle Angel, coming out in a few weeks. It’s already a good year for him.

— 2019 Oscar Nominations: Who was snubbed? Who are the favorites? —

Since the holidays, I’ve been on a serious anti-clutter kick. That’s sort of an annual thing, but this year has more motivation behind it. And that was even before the sensation sweeping the nation, Netflix’s Tidying Up with Marie Kondo, compelled everyone to re-evaluate the contents of their closets and dressers.

For me, it’s mostly about trying to create more room for newer stuff, not “sparking joy.” I don’t want to buy more shelves or containers. I look at old pictures taken of my home (usually from when we were watching Little Niece every day) and it’s striking how clean and uncluttered my desk and bedroom look.

Sure, we’re all going to accumulate more stuff over a period of seven or eight years. But there’s no need to keep a lot of that crap either.

Let’s not pretend they’re all leather bound first editions, guys. That 2006 copy of the Artist’s Marketplace can definitely gtfo of our house.

My clutter is mostly made of books. I don’t re-read many books unless they’re deep favorites, so why hold onto them? I guess it’s nice to have them in case I do want to re-read or loan to a friend. In some cases, I just enjoy knowing they’re around. With others, there’s some ambition or wishful thinking. (“I will read Infinite Jest and Ulysses eventually!“)

But there are also plenty of books I’m just not going to read and should let go. Maybe they seemed like a good idea or were intriguing at one point, but those sensations have passed. I’m not ready to stick to Kondo’s supposed “30 books” rule, but could be a lot more selective there.

It’s not a stressful situation, as this New York Times piece contends. It’s more about disappointment. There’s something I didn’t accomplish. There’s money I shouldn’t have spent. There’s something that no longer interests me. Getting rid of it all — along with t-shirts, magazines, toys, and CDs — just feels healthier, rather than facing the failure.

Among the many, many things I’m trying to catch up on as my decluttering efforts continue is the newsletters that have accumulated in my inbox. One of them is Warren Ellis’s Orbital Operations and in the Jan. 6 edition, he revealed that he was approached to play Jerome F. Davies in Black Mirror: Bandersnatch.

For those who haven’t seen the movie, Davies is the legendary author of the sci-fi tome upon which the protagonist is basing the video game he’s designing.

Put quite simply, my head would’ve exploded had this happened and I saw Ellis in Bandersnatch shortly after writing about what an influence he’s been on me and what I’d like to accomplish this year. As someone who occasionally thinks he sees signs where there really aren’t any, that would’ve been much coincidence to bear.

With Glass now in theaters, I thought I’d link to my review of Split from 2017. For those who hadn’t seen Unbreakable (then a 16-year-old film) at the time, I also wrote a piece on that twist ending, which also served as a retrospective, and whether or not it would mean anything to current audiences.

“Yet is there really an audience for such a sequel? Unbreakable is a 16-year-old movie and seems to live on only in the memory of diehard fans. What about all those people who saw the ending of Split and had no idea what the hell was going on, except Bruce Willis (who will turn 62 this year) showed his face for a few seconds? (I saw Unbreakable when it opened in theaters over Thanksgiving weekend. And I distinctly remember people hoping for another creepy thriller with a surprise twist wondering what all this stuff about comic books and superheroes was. The couple behind me even left during the movie. Superheroes hadn’t yet taken over pop culture in 2000.)”

(I remember a post that someone wrote for us when Glass was announced in which it was clear that the writer hadn’t seen Split or Unbreakable. One of the most teeth-grinding moments, of many, I’ve had as an editor. I will not link to it.)

This is a fantastic cover of David Bowie’s “Modern Love” by Greg Dulli.

Someday, we’ll do a list of the 10 best cover songs here.

** The past week was yet another brutal week in the media industry, with a crashing wave of layoffs from BuzzFeed, Verizon and Gannett. (Here in Asheville, five people were let go from the already bone-thin Citizen-Times staff.) How did we get here? As this Twitter thread explains, it’s not just as simple as “people won’t pay for news online.” [@JeremyLittau]

** It’s not that you’re lazy, it’s that you just don’t want to do the stuff that feels tedious or unpleasant. “You’re choosing a lifestyle of avoidance and low expectations.” OK, yeah — I can go with that. [The Cut]

** In 2019, why are the lines for women’s bathrooms at events like movies, concerts, and sports still so long? (At theaters and arenas, it seems like there should be at least two women’s bathrooms for every men’s restroom.) One day, my 77-year-old mother and others like her, are going to have an embarrassing incident because of this. [The Atlantic]

** MLive’s poll for Michigan’s Best Diner drew 354 nominations, the most since John Gonzalez and Amy Sherman have been doing these reader-driven surveys. I miss all of the joints nominated in the Ann Arbor area (though Asheville has some fine breakfast places). The omelettes, the hash browns, the toast… I’m hungry. [MLive]

** Warren Ellis has already gotten enough love in this week’s (not a) newsletter. But yet another reason I came to admire him over the years was the online forum he hosted. So many present and future comic book creators chimed in over there, as this oral history explains, and a lot could be learned about the industry and writing in general. Ellis’s forum and Brian Michael Bendis’s board at Jinxworld were great resources that informed and entertained. [Image Comics]

** Saying I’m going to watch more TV this year sounds like a trivial resolution, but I’ve missed out on too much conversation with friends, real and online, over the past couple of years. It’s also an example of taking more time for myself, rather than work. This list of 20 best TV shows since The Sopranos is a reminder of that. I’ve only watched nine of the shows listed, and some of them I haven’t watched regularly. Breaking Bad is the castle I must conquer. [New York Times]

** My revived interest in pro wrestling fizzled out during the past year, but I didn’t realize Big E of The New Day is a fellow former Iowa Hawkeye. WWE is increasingly recruiting former college football players to try out, and the sport has a history of performers who gave wrestling a try after their football days ended. [The Athletic – $]

** Over the past year, I’ve completely missed the boat on the updated Nancy comic strip by Olivia Jaimes, despite Vulture and at least one of my friends lauding it. Add Jason Kottke to the list, as well. Maybe it’s time to renew my GoComics subscription and make sure Nancy is part of my daily media/culture diet. [Kottke.org]

** I’m not sure there’s any media outlet I’ve enjoyed more during the past 10 years than New York magazine. And it’s hardly just the magazine. That includes Vulture, Intelligencer, The Cut, and The Strategist. Adam Moss is the man responsible for creating the New York Media juggernaut, and he’s stepping down. I hope those properties continue to produce good content without him. [New York Times]

Are you ready for the Super Bowl? L.A. Rams coach Sean McVay is ready for you!

I’ll try to point as enthusiastically at the pizza I buy for the Big Game.

I wouldn’t call myself a New England Patriots fan, but more of an admirer. I’ve read a few books on the Pats and coach Bill Belichick because their success has been so intriguing. But I root for Michigan man Tom Brady. And a good friend of mine recently moved to New England and can’t avoid Red Sox and Patriots talk. So I follow along.