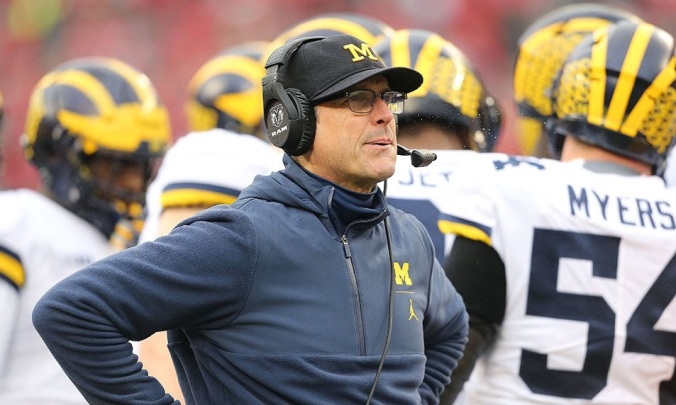 I don’t know if this goes for most sports fans, but I never feel sillier as a human being than when one of my teams takes a really bad loss. (A visit from my little nieces provided a quick and very welcome change-up that prevented me from spending the rest of the afternoon in a dour stupor.) Man, was I evaluating my choices in life after Ohio State annihilated Michigan on Saturday, 62-39.

Though I believed this was the year when the Wolverines would finally break the chokehold the Buckeyes held them in during the past 14 years, feeling that Michigan was the better team and Ohio State was reeling, I was prepared for the possibility of losing. The game was in Columbus. Urban Meyer always has his team ready to play Michigan.

Yes, I would’ve been upset, given what was at stake for Jim Harbaugh and the Wolverines. This was the year that Harbaugh lived up to his hype, showing the nation why it was such a big deal for him to return to Ann Arbor. If Michigan couldn’t beat Ohio State this year, when was it going to happen? Yet I told myself I could’ve lived with a close loss — after getting over the disappointment.

But to lose by 23 points (with the Buckeyes once holding a 30-point lead)? To be outmatched in every aspect of the game?

Where was the offense that dominated with the power running game and quarterback Shea Patterson making big throws and surprising runs? How could a dominant defense not put any pressure on Ohio State’s Dwayne Haskins? What happened to Chase Winovich, Rashan Gary and Devin Bush? Why does this coaching staff never seem to make adjustments on either side of the ball? It often feels like Harbaugh and his staff decide on a game plan — run the ball up the middle, play man-to-man defense — and stick to it, no matter how the game is developing.

Considering that Michigan was poised to qualify for the College Football Playoff and contend for a national championship (OK, they would’ve lost to Alabama), it could certainly be argued that this was the most disappointing defeat the program has ever suffered. Yes, the 2007 loss to Appalachian State was worse because Michigan wasn’t expected to lose and never should’ve lost such a game. But 11 years later, I think the gap has closed between the elite and lower-tier college football programs.

Saturday’s disaster was certainly the worst loss of the Jim Harbaugh era. Any delusions Michigan fans held about finally reaching Ohio State’s level among the top teams in the country were demolished. If it wasn’t already clear that Meyer is a better coach than Harbaugh, this game proved so emphatically. Meyer gets Ohio State prepared for this game and puts them in a position to win. Harbaugh coaches conservatively, as if he’s afraid of losing, and that makes his players tight.

This leads to the question of whether or not Harbaugh is capable of lifting Michigan to the heights its fans expect. It certainly didn’t look that way on Saturday in Columbus. Following the game, I got five messages asking me if Harbaugh could be fired. (Plenty of other fans probably got more; I’m not bragging about that number. But hey, my circle is small — and I like it that way.)

Usually, it’s people from outside Ann Arbor and non-Michigan fans who ask about Harbaugh being fired or deciding to leave for the NFL. It’s a narrative that has stuck to him ever since he took the Michigan job. But Michigan fans and people familiar with the program know that Harbaugh is not going to be fired. For better or worse, he’ll likely be Michigan’s coach for as long as he wants.

I’m not saying that’s necessarily a good thing, especially if he doesn’t live up to championship expectations. Yet Harbaugh has already restored Michigan football to nationally recognized status. He’s one of the most recognizable coaches in America. He’s made the program matter again. No, the results haven’t matched the hype which has led to a lot of resentment from fellow coaches, media and fans.

But that hype was overblown to begin with, inflated by the notion that Harbaugh was the returning son who would become the savior of Michigan football. While that is definitely the expectation, how soon those heights would be reached is probably where all of this went wrong to begin with. If Michigan fans were told by Harbaugh’s fourth year, the team would be a win away from a Big Ten championship and a College Football Playoff bid, I suspect most of them — the rational, reasoned ones — would have been happy with that.

To some, that will sound like an excuse. Hey, I admit I expected more too. Yet maybe this wasn’t just a case of Harbaugh being able to coach Brady Hoke’s players to greater achievements. That’s always been the underlying belief among Michigan fans: Lloyd Carr and Hoke brought in top-tier recruits, but couldn’t coach them to fulfilling their potential. But maybe Harbaugh’s restoration project had to work deeper than that. The Wolverines were 5-7 in Hoke’s final season. They improved to 10-3 the following season.

While last year was a disappointment, unleashing a wave of invective toward Harbaugh, many fans forget that Michigan had to work in a lot of young players going into the season. They were bound to improve this year, especially with a new quarterback who had proven himself elsewhere at the college level. And that’s exactly what happened. Getting humiliated by Ohio State was undoubtedly frustrating and disheartening. Worst of all, the loss showed that Michigan isn’t nearly as good as it believed. 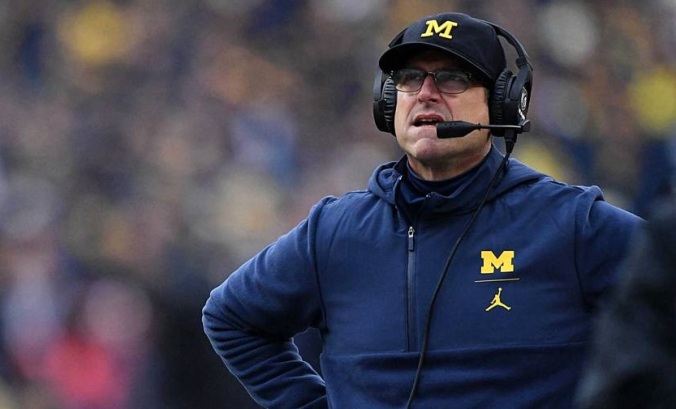 It’s not easy to accept that Ohio State is simply better, that Urban Meyer — personal judgment and character aside — is a singularly great coach. But that conclusion is painfully clear after what happened on Saturday. Maybe Michigan fans haven’t worked through all seven stages of grief yet, but a sizable portion of the fanbase and media that covers the team has reached acceptance.

Jim Harbaugh is not going to be fired. And I sincerely doubt he’d leave when he hasn’t achieved his goals at Michigan. Sure, if Rich Rodriguez or Brady Hoke had lost 62-39 to Ohio State and was 0-4 against the Buckeyes, Michigan would probably be strongly considering a coaching change. But I think the question is ridiculous. Harbaugh is the guy Michigan wanted. He’s the guy school administrators and athletic officials would want to hire. There’s no one else better suited for the job.

That’s not to say there isn’t vast room for improvement.

Former D-coordinator on U-M's defense Saturday: "When you you emphasize only one style all year (man-to-man) and then you meet an opponent that can beat your man, how can you expect your team to execute zone when you don't have the practice or game reps?"

On defense, the game plan needs to be more versatile. Michigan fans love defensive coordinator Don Brown and I’m right there with them. But if something isn’t working — such as man-to-man defense against the crossing routes that Ohio State was running — coaches and players must be able to try something else. There need to be other options when it’s clear that cornerback Brandon Watson or linebacker Devin Gil is being exposed repeatedly.

Harbaugh and his offensive staff need to get past the idea of Big 10 power football and realize that teams like Ohio State are winning because they play modern offense that utilizes their athletes best. There’s something to be said for establishing toughness after the Rich Rod and Hoke eras. But there’s also putting players in the best position to win and using other advantages besides sheer strength and size. Let the quarterbacks and receivers air it out.

It’s not always that easy, of course. But it’s frustrating to see an opponent keep poking an open wound and the coaches not try anything different.

Though the results haven’t matched expectations that have probably been outsized, Harbaugh has put Michigan football back into a position where those goals are within reach. It’s a national brand again. Recruiting has replenished the roster to the point where stars leave and new ones step in, where some hopefuls don’t work out but others step up to meet the challenge. Hopefully, national championships (and victories over Ohio State) are soon to follow.